GenCon 2014 will see the launch of an integral part of the Wizard of the Coast’s Organized Play program: D&D Expeditions. For those hip to the lingo of Organized Play, D&D Expeditions is analogous to the many Living campaigns of D&D’s past. While there are other parts of the D&D Adventurer’s League, D&D Expeditions will highlight and carry forward the public-play campaign. These Expedition adventures will form the crux of a thread of the campaign that takes place in the Moonsea area of the Forgotten Realms, letting players have more agency in what happens in the story of the area as a whole. Will Phlan survive the Tyranny of Dragons, or will the oft-doomed city again become a burning heap of rubble? That will be decided by the players in this world-wide campaign. Individual heroes will be called out, making a name for themselves in the storied history of the Realms.

I was fortunate enough to write one of the first Expedition adventures, Defiance in Phlan. As anyone who has ever DMed a new campaign knows, those first few sessions of a campaign, whether it is a home campaign or an Organized Play campaign, are important in setting the tone and offering a glimpse of what will happen in the later parts of the story. That means my fellow adventure designers—Teos Abadia, Greg Marks, and Pieter Sleijpen—and I needed to work closely with the Adventurer’s League admins in hitting the mark. Not just THE MARK, but many marks: understand the setting, craft important NPCs, be aware of special rules, conform to campaign-specific mechanics, etc. In addition, we had to work from a rules set that was still under development.

In addition to the challenges of writing an adventure that helps launch a new campaign, Defiance in Phlan also has to take on another role: it is a delve event. A delve in this case has a particular meaning. It is a session meant to be played in a very short amount of time to give people a taste of the game. This usually saw the players given pre-generated characters and dropped into a couple of combats. If there was a story to the delve, it was rudimentary and not connected to any Living campaign. If people who played the delve enjoyed the experience, they were then usually pointed to a regular 4-hour session of a game that introduced them to the concept of a Living campaign, where their characters could become part of the overall campaign.

So when I received my instructions for Defiance in Phlan, I was surprised to see that it was both a delve and part of the D&D Expeditions campaign. I’d written delves before, and I’d written adventures to launch campaigns before, but never before had I done both simultaneously. I love a challenge. Then I realized that the outline called for the adventure to be a delve made up of five different 1-hour mini-missions. And the missions needed to be playable in any order. And each mission should make sense outside of the context of any other adventure, because some people would only play one or two of them at random. And each mission should touch upon one of the five factions that adventurers can join. And many of the players would be brand-new to D&D. And all of the pillars of play (interaction, exploration, combat) need to be represented by the missions. And that the parts needed to fit together in case a DM later wanted to run the adventure one complete adventure. And did I mention each mission had to be playable in less than an hour?

I love a challenge, but that is a lot of “ands.” To put my trepidation into perspective, I normally write an adventure, playtest it once, make revisions, and then turn it over to the developers for editing and further playtesting. In this case I ran three different playtests, with significant revisions taking place after each. If I was happy with the story, the mission ran too long. If the mission ran too short, something seemed lacking in one of the pillars. I hammered away, with some excellent feedback and suggestions from my playtesters. I cannot say I am satisfied with what I turned in, but I would worry if I was satisfied.

So, if you happen to play one of the parts of Defiance in Phlan at GenCon, or at any public-play event that the adventure can be ordered for, drop me a line and let me know how it went for you. Let me know your tales of woe, or your heroics that saved the day at the last second. Let me know how your DM took a few words on a page and brought it to life for you. Most importantly, let me know what you thought of Madame Freona and her five daughters. And how was the tea? 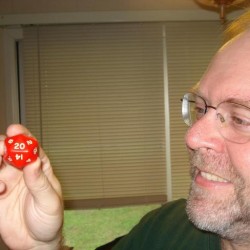 Talk Games!
shawn.merwin
Freelance Game Designer at Encoded Designs
Shawn's professional design and editing work in the roleplaying game industry has spanned almost 20 years and over 2 million words of content. His Dungeons & Dragons work has ranged from 3rd to 5th edition, showing up in sourcebooks, adventures, articles, and Organized Play administration. He has been a driving force in several Organized Play programs, and has written material for Kobold Press, Pelgrane Press, and countless others. He has an MA in English and an MFA in Creative Writing from Vermont College of Fine Arts.

Shawn's professional design and editing work in the roleplaying game industry has spanned almost 20 years and over 2 million words of content. His Dungeons & Dragons work has ranged from 3rd to 5th edition, showing up in sourcebooks, adventures, articles, and Organized Play administration. He has been a driving force in several Organized Play programs, and has written material for Kobold Press, Pelgrane Press, and countless others. He has an MA in English and an MFA in Creative Writing from Vermont College of Fine Arts.