The following article is reprinted with the author’s permission. It first appeared on November 6, 2015, on the author’s blog, Merric’s Musings, but has been updated by the author to reflect the subsequent update by the D&D Adventurers League.

Normally, you can rebuild your character any number of times before you reach 5th level. This one-time-only option allows you an opportunity to rebuild your higher level characters. I’ve included details on the rules sources you can use below (under Story Origins).

You can’t just change everything about your character. The full rules for rebuilding are found in the D&D Adventurers League Player’s Guide, but here’s a summary of what you can and can’t change. Please double-check with the Player’s Guide!

What You Can’t Change

Your character’s name is on all your logsheets, which detail your XP, Renown, Gold and Magic Items. That’s why you can’t change that.

The Story Origin determines which set of rules sources you can use to build your character. There are three Story Origins at present – corresponding to the D&D Storyline Seasons – and once selected, can’t be changed.

Equipment you’ve gained over the course of adventures can’t be directly changed. Have a look below for the exceptions and clarifications to that.

What You Can Change

In other words, you can change everything you got to select during character creation and levelling up, except for Story Origin and Character Name. You don’t get to change the rewards you gained during playing the game.

“Rules Sources” mean that if you have the Elemental Evil Story Origin, you can switch between using the Elemental Evil Player’s Companion or the Sword Coast Adventurer’s Guide as your source of additional options. (This also applies to other origins in the future.) It doesn’t mean you can change your Story Origin.

As Renown is a measure of how well-known you are and respected within your faction, if you change to another faction, your Renown drops to zero.

Of course, Hit Points, Armor Class, Initiative and other derived statistics will change based on your other choices.

For the rest of your equipment, you can change it by selling it (at half price) and buying new pieces (at full price). Yes, it’s not exactly rebuilding, but it’s what you’re allowed to do!

Here’s an updated list of Story Origins and the Rules Sources you can use with them. Note that the regular rules on D&D Adventurers League character creation still apply (fixed hit point gain, point buy ability scores, etc.). You can’t choose evil alignments (except due to your faction). You can choose to play the variant human in the Player’s Handbook.

In addition, you may choose one of these substantive rules sources:

Restrictions and Clarifications on Using the Sword Coast Adventurer’s Guide

When you rebuild your character, you basically recreate your character, making different choices along the way. For example, if you took the Mounted Combat feat and discovered you never are mounted, you could replace it with the Heavy Armor Mastery feat. Or you discover your 8 Charisma character is always the one talking to people, you could rearrange your ability scores so your Charisma is higher. Rebuilding is an opportunity to fix the character, especially after you’ve had a chance to see it in action. The style of game you’re playing may not be the one you expected!

In the D&D Adventurers League, you may rebuild your character any number of times before you reach 5th level. After 5th level, you are stuck with the choices you’ve made. However, because the Sword Coast Adventurer’s Guide has just been added to every story origin, you’ve been given a one-time opportunity to rebuild your higher-level characters as well, even though you don’t have to use the Sword Coast Adventurer’s Guide in the rebuild.

When does this opportunity expire? Well, when you use it, it does! Otherwise, the answer is “it depends.” Basically it’s best if you use it before your next session with that character, but we’ll all understand if you hold off for a couple of weeks until you can actually get a copy of the Sword Coast Adventurer’s Guide! Check with your DM and your local store’s organiser for how they want to handle it. Waiting six months until doing this rebuild? That’s probably a bit too long!

The final stage of the rebuilding process is to update your logsheet. Don’t know how to do that? Find out in the Advanced Logsheet Tutorial! 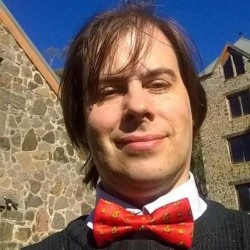 Merric Blackman
Merric Blackman is a 40-something Australian who has spent his life fascinated by all sorts of games. He posts a mix of reviews, session reports and play advice on his blog, as well as maintaining a list of every D&D 5E adventure. He currently serves as the Local Coordinator for Victoria, Australia of the D&D Adventurers League.

Merric Blackman is a 40-something Australian who has spent his life fascinated by all sorts of games. He posts a mix of reviews, session reports and play advice on his blog, as well as maintaining a list of every D&D 5E adventure. He currently serves as the Local Coordinator for Victoria, Australia of the D&D Adventurers League.